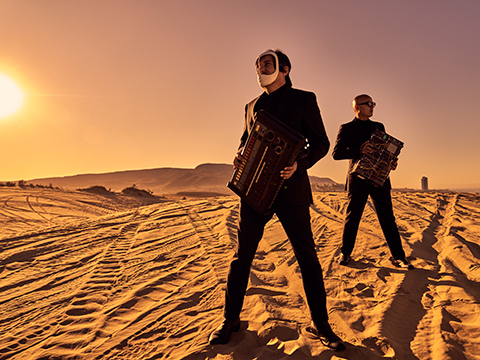 BOSTICH + FUSSIBLE emerged from the burgeoning electronic scene in Tijuana. In 1999 they invented a new style of music called Nortec - a fusion of Norteño (“from the North") and Techno, founding as well the Nortec Collective. Documenting the collision between electronic music characterized by heavy dance beats and traditional forms of Mexican music performed with live instrumentation, Nortec Collective paved the way for a new generation of producers and DJs that have reinvented electronic music from a global perspective. Their last album “Motel Baja” was released in 2014 closing their Nortec trilogy with the Grammy nominees “Bulevar 2000” and “Tijuana Sound Machine”. The duo has toured for the last 15 years around the globe from Europe to Australia, from South America to Japan and China, also performed in the most important festivals such as Bonnaroo and Coachella - all while still managing to find the time to become iconic artists in their home country of Mexico. Since 1999, the Nortec Collective musicians have toured throughout the United States, Mexico, Europe, Japan and Latin America. They have played at Central Park’s SummerStage and Irving Plaza in New York, as well as the Winter Music Conference in Miami, the Kennedy Center in Washington, D.C., and shows at the Royal Festival Hall in London and Elysée Montmartre in Paris. They have done remixes for Beck, Calexico, Ennio Morricone, Kronos Quartet, Leigh Nash, Lenny Kravitz among others... The song “Tijuana Makes Me Happy” was on the soundtrack of 2006 FIFA World Cup Germany, the video game by EA Sports, and is the title song of the feature film by the same name. In 2016, Nortec collaborated on the production for the music for Cirque Du Soleil’s show, Luzia.
Electro, Global Bass, Mexico, Tropical, World Music
Availability Europe > 2023
On Stage 5
Recent Releases De Sur A Norte (2022)
Press Links