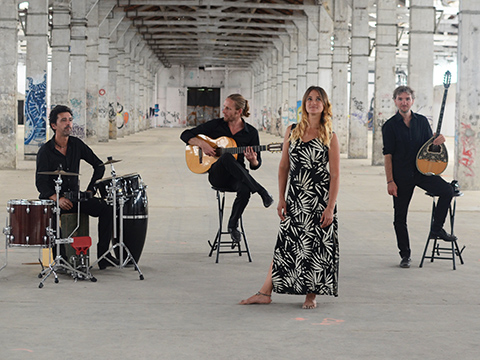 It was during a trip to Argentina, on the colorful and arid lands from the northwest of this country, that this Franco Argentinian quartet gathers for the first time. Perched on a mountain at 3000 meters, wandering the popular open stages, the musicians decide to call this musical and human encounter the Cuarteto Tafi.

Since its beginnings on the French scene, the group has brought its personal and original touch to world music, by mixing song in poetic and committed Spanish - sweet nostalgia for the Argentinian exile of the singer - to the sound of the eastern Mediterranean from the Greek bouzouki, to the softness and dexterity of the flamenco guitar, and the rhythms bewitching Afro Latin percussions.

Each with its own history and its metal influences, salsa, flamenco, rock. From these different personalities and musical stories, they have managed to create an entity, 4 albums and a notoriety noticed on the French scene.

Today their musical style is open, uninhibited, propels and frees itself: an original fusion between music with Latin American influences and arrangements with modern sounds.

Their music whispers and shouts to us about the world, with its bitterness and its flaws, its painful borders and its revolting injustices, but also with its beauties and its buds of hope, its loves and his fights.