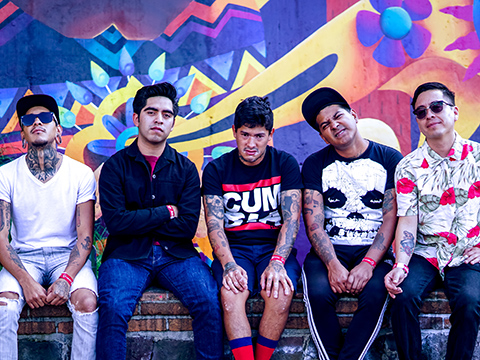 Born and raised in the deep outskirts of Mexico City, the Gama brothers are keeping alive the rich legacy of marimba music running through their family with their latest project, Son Rompe Pera.

While firmly rooted in the tradition of this historic instrument, their fresh take on this folk icon challenges its limits as never before, moving it into the garage/punk world of urban misfits and firmly planting it in the 21st century.

Originally performing alongside their father at local events since they were kids, they now find themselves at the forefront of the contemporary international cumbia scene with their sonic explorations of the classic marimba. Their absolute unique blend comes from a typical youthful rebellion, when as teenagers they left behind their upbringing on the marimba and began to play in various punk, rockabilly and ska bands.

Now they’ve gone full circle with the marimba back leading the way, and mixing all of their influences together with their energetic take on the popular instrument, giving it a new twist never before seen in Mexican folk music.

Their live shows are a sweaty mess of dancing fans, and this garage-cumbia-marimba-punk band (the only band of its kind in the world) never disappoints on stage. Their authenticity shines through as they give their modern interpretation of Mexican, Peruvian, and Colombian classics, as well as their own original material and some surprise covers. The contrast of the traditional marimba with their youthful attitude and street sense connects the audience to the past while they dance into the future.

Their first album, Batuco, due out on the ZZK label imprint, AYA Records, in 2020, is named after their recently deceased father, and is a representation of everything he taught them growing up, plus their first steps into a new, international career.

UNESCO inscribed the marimba on the 2015 list of the Intangible Cultural Heritage of Humanity.