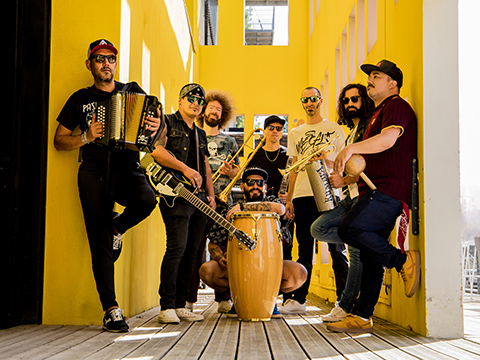 Exciting cumbia from Mexico and beyond

The roots of Kumbia Boruka are to be found in Monterrey, the cumbia capital of Mexico and the place where Hernan Cortés, the accordion player and band leader, grew up in the eighties. He didn’t only learn to play the accordion from the living legend of Mexican cumbia, Celso Piña, but he was also the percussionist in the band of Celso Piña during long international tours.

Besides their own contemporary and festive compositions, the band knows how to bring new flavours to classic cumbias from the sixties, mixing it with influences from reggae, dub, African music and rock, psychedelic electric guitar melodies, an extensive rhythm section and powerful and exciting brass arrangements. The Peruvian cumbia, called chicha, is not forgotten either. The result is a hybrid cumbia, nueva cumbia, with fierce Latin energy that will blow your mind! It’s party time!

With two albums and more than 250 shows, Kumbia Boruka has fulfilled his challenge by making the Old Continent vibrate at the emblematic rhythm of Latin America, the Cumbia.

In addition, the band's music appears with 5 songs in the soundtrack of the excellent documentary series Maradona in Mexico launched on Netflix last year.

The "Remedio" that Kumbia Boruka offers is an authentic and compelling cure against the evils of our time. To be enjoyed without moderation !