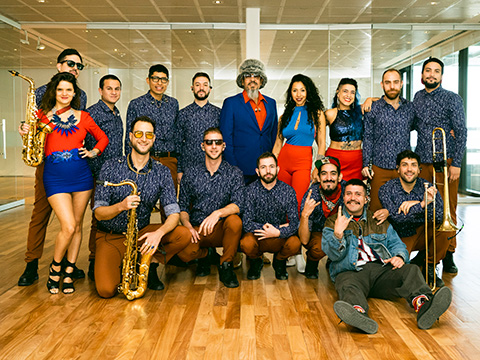 La Delio Valdez, is a cumbia orchestra created in Buenos Aires, Argentina, in 2009. As a cooperative of musicians, they have developed their own style based on cumbia as a musical rhythm that unites Latin America as a common language.

LDV takes up the great orchestral tradition of the continent. Its cooperative organization refers to the historical Argentinian Tango Orchestras; its theatricality on stage brings up the great Caribbean Orchestras, embracing powerful and overwhelming sound and dance as their main style feature.

The orchestra appropriate these traditions in its own way, taking a modern approach where the electric and the acoustic are combined. They have a diversified sound that combines resources from other styles (Andean music, salsa, rock, jazz and reggae) to create a sound that is both traditional and modern: an international and contemporary sound where the mestizo identities of the region are reflected.

In 2022, La Delio Valdez presents his new album on stage with a tour that includes Mexico (including shows in major festivals Vive Latino and Pa’l Norte), Chile, Uruguay, and 15 cities of Argentina (3 sold-out shows in the mythical Luna Park Stadium in Buenos Aires).

For the very first time in Europe during the summer of 2023!