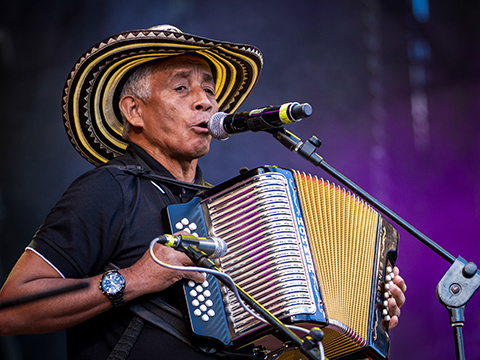 Accordion player and composer, Carmelo Torres is considered as one of the main protagonists in the story of Colombian Cumbia. He is the living legacy of Cumbia Sabanera, a rural accordion style of cumbia from San Jacinto, in the Caribbean region of Colombia, influenced by the traditional flutes.

He learned to play vallenato first, by himself, before he met the ‘King of Cumbia’, Andrés Landero who was his teacher since kid, and started to play cumbias.

Since Landero passed away in 2000, Carmelo’s major concern’s been to carry on his teacher’s legacy, keeping the cumbia genre alive and teaching the youngest.

Carmelo is now knowned as The Accordion Bible. In 2019, Carmelo Torres’ music still smells as the music of the countryside, the sabana is present when he sings about labour works, nature, life and love. Indeed, He lives this new century and the globalization of our world musics as cumbia and vallenato and his music can be danced in nightclubs making part of our generation, looking backwards and towards in the same song.

With his group, he has performed widely at home in Colombia at caribean festivals winning all the contests and at the prestigious Festival Colombia al Parque in Bogotá in 2013. Torres has also travelled extensively with his conjunto as far as Europe, Australia, South Korea, Morroco and throughout Latin America in México, Panamá, Perú, Uruguay, Paraguay, Bolivia and Brasil.