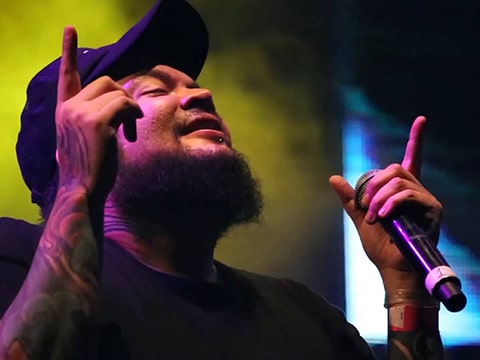 Patricio Chapa Elizalde, aka Pato Machete, along with Fermin IV and Toy Selectah, launches the Hip Hop band that set the tone and gave sound to a movement that reached beyond his own city, Monterrey, to be listened in countries around Latin America, and then the world: Control Machete.

With Control Machete he recorded 3 albums: Mucho Barato (1997), Artilleria Pesada Presenta (1999) and Uno, Dos: Bandera (2003). An aggressive, direct and organic sound, with powerful lyrics accompanied by a sonic onslaught that quickly cemented them as an icon of Hispanic urban culture.

In 2008 he worked with the legendary producer Jason Roberts, and released his first solo album entitled Contrabanda which includes a cover of Señor Matanza, original by Mano Negra accompanied by the famous cumbia accordionist: Celso Piña.

He has shared the stage with international artists such as David Bowie, Eminem, Kanye West, 50 Cent, U2, Red Hot Chili Peppers, Faith No More, Los Fabulosos Cadillacs, Molotov, La Mala Rodriguez, among many others. He has also collaborated on recordings with Buena Vista Social Club, Cafe Tacuba, Anita Tijoux, Grupo Fantasma and Panteon Rococo, to name a few.

Pato is currently working on his third solo album which will be edited in May 2016. Then together, start the new world tour with his band CONTRABANDA.

He will be touring Europe for the first time in October 2016 with a frenetic Hip Hop Tropical live show to present his brand new album RIFA! (La Tuna Records / Warner Music)