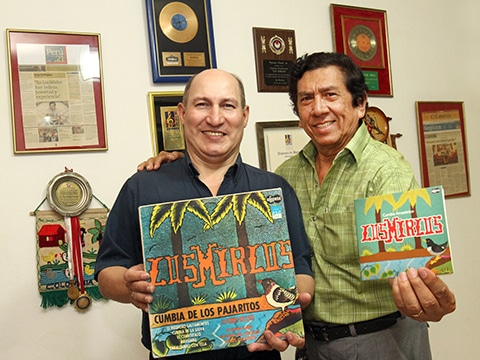 Named after a black bird in their native jungle, Los Mirlos are the uncrowned kings of tropical Peruvian Cumbia, or Cumbia Amazonica. The band came together in Lima during the oil boom of the 70s and created a uniquely new and powerful party music inspired by the Anglophone psychedelic rock and surf music of the time.

Fast-forward some 40 years, and Los Mirlos have travelled and performed in almost every Latin American country, and are still considered essential for the culture of Amazonian Cumbia, not in the last place because of popular compilations such as "Roots of Chicha", "Back To Peru", and "Cumbia Beat Vol. 1".

Songs like 'La Danza de Los Mirlos', 'Sonido Amazónico', 'Lamento en la Selva', 'Muchachita del Oriente', and 'Chinito en Onda' are kept in the memory of many people worldwide, who all danced to them at one point of their life.

The iconic band is well known for the incredible productions of psychedelic Peruvian Cumbia that they have produced since the 70’s. Widely known as the mastermind of the Peruvian-Amazonian Cumbia, they are back to the musical scene to share with the world the Peruvian musical history and the value of it.